Happy one-year anniversary, Genre Junkies! Our “journalistic integrity” is right out the window when Sandra and Scott get to fawn over Kendare Blake, author of the Three Dark Crown series and the newest installment: Two Dark Reigns.

We are so honored to have had the opportunity to speak with one of our favorite authors, and we even swapped some excellent recommendations! Since we wanted to give our listeners a chance to actually read it, look forward to our full spoiler-filled discussion of Two Dark Reigns in a few weeks! 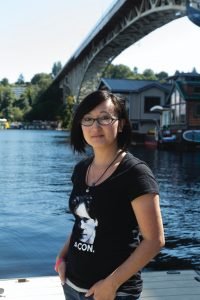 Kendare Blake is the author of several novels and short stories, most of which you can find information about via the links above. Her work is sort of dark, always violent, and features passages describing food from when she writes while hungry. She was born in July (for those of you doing book reports) in Seoul, South Korea, but doesn’t speak a lick of Korean, as she was packed off at a very early age to her adoptive parents in the United States. That might be just an excuse, though, as she is pretty bad at learning foreign languages. She enjoys the work of Milan Kundera, Caitlin R Kiernan, Bret Easton Ellis, Richard Linklater, and the late, great Michael Jackson, I mean, come on, he gave us Thriller.

To learn more about our unique scoring system, go to genrejunkies.com/scores.

Intro/Outro Theme “Where Did She Go?” by Jay Man www.ourmusicbox.com.

75 | Fantasy | “The Night Country” by Melissa Albert – A Hazelwood Novel